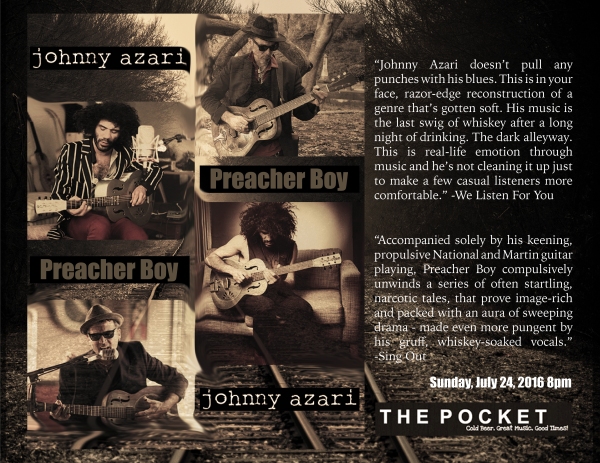 Johnny Azari’s life and my life overlap in a great many ways. Musical, sure. We both play slide on resonator guitars. We’re both heavily influenced by the country blues. We both stomp our boots a great deal, and sing with rough-hewn voices. Read reviews of our music, and half the words are generally the same. Howl, dark, poetry, Robert Johnson, narcotic, gravel, ghost, whiskey, blues, night, etc.

“Johnny Azari doesn’t pull any punches with his blues. This is in your face, razor-edge reconstruction of a genre that’s gotten soft. His music is the last swig of whiskey after a long night of drinking. The dark alleyway. This is real-life emotion through music and he’s not cleaning it up just to make a few casual listeners more comfortable.”
—We Listen For You

“Johnny Azari is a sort of time traveler. As the musician seeks a blend between Jimmy Rogers and Robert Johnson, he hears his music going back to the roots of blues. Azari’s sound features a mix of Delta blues and alternative country — two genres known to demand authenticity from their performers. Azari said he’s just fine with that.
—The Joplin Globe

“Accompanied solely by his keening, propulsive National and Martin guitar playing, Preacher Boy compulsively unwinds a series of often startling, narcotic tales, that prove image-rich and packed with an aura of sweeping drama – made even more pungent by his gruff, whiskey-soaked vocals.”
—Sing Out

“With some of the most innovative roots music on the scene today, Preacher Boy will make a believer out of even the most skeptical. The album creates dusky lyrical landscapes littered with hobos, ghosts, drunks, loneliness, love, and salvation. The result is a totally unique twist on roots music.”
—Blues Access

Location? Sure, that too. Brooklyn and New Orleans in particular.

Business? A bit. We overlapped on Altco Recordings for a wee bit there. That’s how we met, actually. Well, we didn’t actually meet. We wrote. We corresponded. We listened to each others music. But we never actually met in the conventional sense of the word. But we’re about to.

I had the pleasure of writing a review of Johnny Azari’s music once. I share it with you here:

Johnny Azari is the kind of artist you often see referred to as an “old soul.” These people evidence a wisdom beyond their years, and seem to speak from another time. We could say this about Johnny Azari, but we won’t. Because while his roots runs very, very deep, and while he does possess a preternatural musical maturity, his music is very NOW. It is funky, it is soulful, it is raw, and it is very, very real. Put another way, God Damn Blues is goddamn powerful.

If your first look at the Lucian Freud by way of R.L. Burnside cover—and song titles like Empire of Illusion, Immaculate Abortion, and Opiated Like Tuesday—suggests to you that you’re in for something intense, the first ominous stomps of the title track will confirm it.

Depending on your own musical roots, you may need some sonic references to help you find your way into understanding this music. So you’ll do well to bone up on your Son House, Blind Willie Johnson, and Charley Patton. And make sure to dose up on some Leonard Cohen, Townes Van Zandt and Tom Waits while you’re at it. Bin diggers can happily cue up the gothic Americana of 16 Horsepower, the New Orleans meets the Delta sounds of John Mooney, and even The Doors of “Waiting for the Sun” and “Wild Child.” Ultimately though, the artist you most need to listen to is Johnny himself.

His voice is untamed and without boundary—one part howl and one part hum. His guitar playing and slide work have the frenetic precision of a Kokomo Arnold track, and his lyrics enact some sort of cross between Woody Guthrie and a primal scream therapy session. But at its damaged yet still wildly beating heart, this album is simply about a man and his guitar, and the stories the two combine to tell. At the end of “Empire Illusion” Johnny sings, “Oh, I think I’m too old/I think I’m too young.” Listen to this album, and you’ll think he’s timeless. 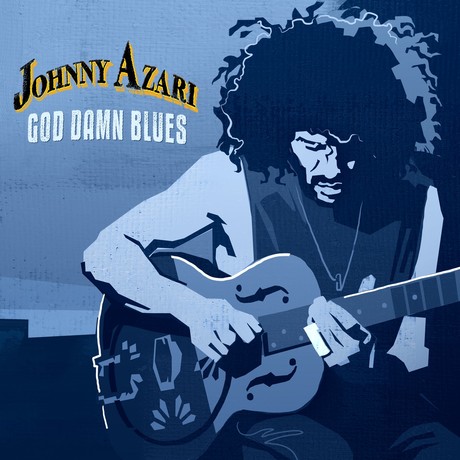 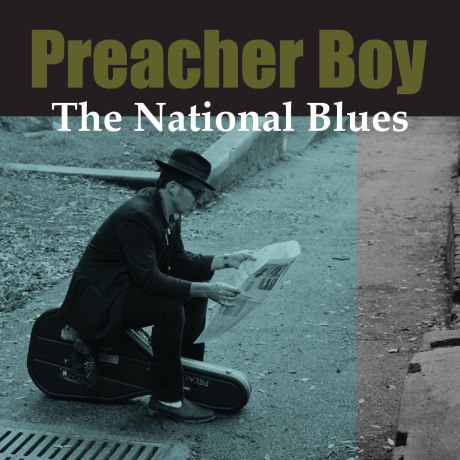 This entry was posted on Saturday, July 23rd, 2016 at 11:16 am and tagged with God Damn Blues, Johnny Azari, National Blues, Preacher Boy, Santa Cruz, The Pocket and posted in Live Performance, Musicians, The National Blues. You can follow any responses to this entry through the RSS 2.0 feed.
« Preacher Boy Trio: Now, Con Funky Adicional
99 Bottles of Beer on the Wall »