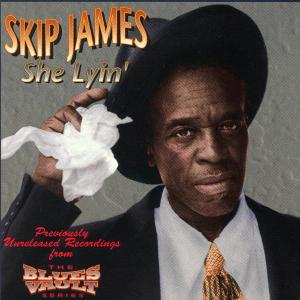 Selecting among the myriad recordings available from Skip James is a tricky business—the country blues canon—limited as it admittedly is—has been extensively mined again and again by different labels, and for the sake of various compilations, reissues, etc.

I’m partial to this particular collection for two reasons: 1) it’s really good, and 2) the story behind it is really good. Re: #1, listen, and you’ll agree. If you don’t, there’s something really wrong with you. Re: #2, this is the very first set of recordings Skip James made following his “rediscovery,” making this as incredibly powerful portal into the life of an extremely gifted and complicated artist.

Skip James was in the hospital when a group of enthusiasts (including John Fahey) “found” him in 1964. The album is a combination of tracks recorded in a home studio in Maryland, and at a coffee house in D.C., shortly after he got out.

I find this album just brutally compelling and heartbreaking in so many ways. Partly it’s just the eerie mournful menace of the music itself. But maybe even more than that, it’s the idea that all this beauty was alone for so long, with so few knowing that such beauty had been made. It’s been said before, that the best thing in the world for an artist, is to be able to create beauty. The second best thing is for someone else to recognize the beauty that you’ve made.

This is genuinely one of the most incredible songs ever written and performed. Like the haiku tradition, country blues at its best captures something ineffable and transcendent in seemingly simple form. Also like haiku, it often relies on and leverages an accepted canon of “code words” and symbols to represent larger concepts, spaces, ideas. But there is a certain raw poetry that is, I think, unique to country blues as a lyric form. And when you couple that rawness with music this haunting, this complex, this impassioned, this lethal, you get magic:

And the people are driftin’ from door to door
Can’t find no heaven, I don’t care where they go