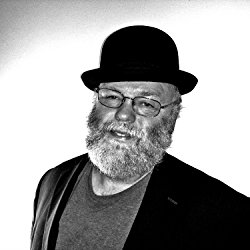 Robert Lavett Smith is one of the finest poets I’ve ever had the pleasure of reading. From early works such as “The Nob Hill Mariners” through his first masterpiece “Everything Moves With A Disfigured Grace,” on to recent collections such as “Smoke In Cold Weather” and his latest offering, “The Widower Considers Candles,” his voice has been clear, his language poignant, his vision devastating, and his heart profound.

That I have the honor of calling him friend is a blessing I will remain forever grateful for. That I have very occasionally crept into his work in some small fashion is a miracle I never quite believe, but it has indeed happened, and in fact, it happened again very recently, semi-indirectly courtesy of something written here on this blog.

The January 4th entry in my 365 Days of Album Recommendations series featured an album by Dave Van Ronk. Bob read the entry, and shortly thereafter produced the following extraordinary poem, which I humbly, gratefully, and excitedly share here, with the author’s permission:

To my delight, apparently it was true—
The Internet biographies inform me—
That Dave Van Ronk was fond of Tullamore Dew.

Dave was a Brooklyn bluesman through and through,
A folkie steeped in authenticity;
To my delight, apparently it was true.

I’ve long relied on booze and music, too;
And now I learn, somewhat belatedly,
That Dave Van Ronk was fond of Tullamore Dew.

He’d hoist the jug after a song or two,
Wetting his whistle not infrequently—
To my delight, apparently it was true.

All the performers of the era knew
His weathered voice owed something to the whiskey,
That Dave Van Ronk was fond of Tullamore Dew.

Since Dave embraced the same brand that I do,
I hasten to applaud his loyalty.
To my delight, apparently it was true
That Dave Van Ronk was fond of Tullamore Dew.

If you read this, and love it as I do, I encourage you to discover more of Bob’s work. He is a gift to us. He can be found on Amazon here.