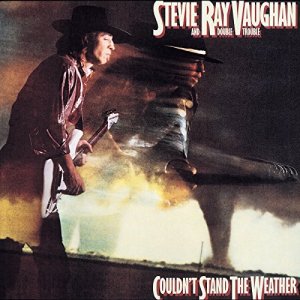 Oh hell yeah I am SO recommending a Stevie Ray Vaughan album!

Except that I actually DO blame The Beatles.

But I don’t blame Stevie. The man just played the SHIT out of the guitar.

That said, I picked this album largely for reasons other than his guitar playing. Texas Flood was all about guitar, and Soul to Soul was unfortunately the beginning of him falling overboard into a sea of booze and coke, and the cracks show.

Here, though, on this album, he is doing everything right. His guitar playing is still knockout, but it’s also more sophisticated, more nuanced. And his vocals have improved 100000%. And he’s writing real songs here, and managing the moods and vibes of the covers he reimagines.

Truth be told, Stevie Ray Vaughan never made a perfect album. I don’t know that he ever found the emotional maturity and mastery to direct all that insane talent into a single album. Like so many of the great jazz improvisers, he was just too in it. Every moment was the only moment. That’s a hard thing to commit to an album. John Coltrane managed it only once, with A Love Supreme. Stevie Ray never pulled it off. But he made an amazing record here, one worthy of his talent.

Recommended track to begin with: Couldn’t Stand The Weather

Yeah, I know. The title track. The hit. But really, it just IS the showcase piece for what the album achieves. That said, Tin Pan Alley is the true star of the whole thing. One take. First take. Just incredible. Thank you legendary producer John Hammond, for insisting on the first take being the released take.