Phil Ochs – All The News That’s Fit To Sing 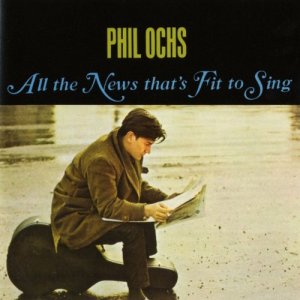 Hup, two, three, four, marching down the street
Rolling of the drums and the trampin’ of the feet
General salutes and mothers wave and weep
Here comes the big parade
Don’t be afraid
Price is paid
One more parade …

Sharp-eyed readers will note a distinct similarity between this album cover, and the cover of The National Blues:

This is of course by design. An homage I felt I owed, for the influence this album had upon me. I first heard “One More Parade” on a folk music radio show when I was about 15 years old and living in Seattle. I was staggered by the song, and still am.

The years were not kind to Phil Ochs, and he probably wasn’t too kind to the years either. But, in “All The News That’s Fit To Sing” we have a perfect album. Frozen in time. The living enactment of what political folk music—protest music—was and could be. Of a time and place, yes. But still, perfect.

There is in fact quite a bit more to this album than “protest music.” And even when it IS protest music, it’s often subtle, unique, and a special version thereof. Yes, there are the “talking blues” songs. And yes, there is Cuba and Vietnam. But there is also “Lou Marsh,” a deeply affecting song about a man not likely to have been remembered outside of a small circle of friends (that’s a reference to another Ochs song, about the Kitty Genovese story!) if it hadn’t been for Ochs’ beautiful memorial:

There were two gangs approaching in spanish Harlem town
The smell of blood was in the air, the challenge was laid down
He felt their blinding hatred, and he tried to save their lives
And the answer that they gave him was their fists and feet and knives

Will Lou Marsh lie forgotten in his cold and silent grave?
Will his memory still linger on, in those he tried to save?
All of us who knew him will now and then recall
And shed a tear on poverty, tombstone of us all

Even today, Lou Marsh’s identity is often considered a mystery, with some wondering if he was in fact a real person. He was. His obituary reads as follows:

Louis “Lou” Cordell Marsh died on January 7, 1963 in East Harlem where he was employed by New York City as a youth worker. He died after being beaten by members of a youth gang he was working with. Lou had enrolled at YDS in 1956 but then took time off for an extended campus ministry internship at Antioch College. In 1958, while at YDS, he traveled to the USSR (with Dave Wiley) as members of the first USA-USSR Eisenhower-Khruschev student exchange which was organized by the YMCA. Had he stayed at YDS, he could have graduated with the Class of ’61, but he took the position in New York instead. (See following article from The Christian Century on Lou Marsh by Dean Peerman, YDS ’59.)