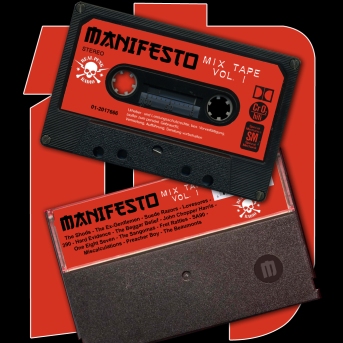 This, the 3rd annual compilation from legendary DJ Greg Lonesome—host of The Rock n’ Roll Manifesto—is a celebration of those days when creating a custom mix tape was exactly that, a Manifesto. A personal statement of belief.

If THIS compilation is THAT statement of belief, then safe to say Greg Lonesome believes in intelligent, forward-looking, legacy-minded, punk rock, roots rock, garage rock, art rock, and … rock.

I cannot encourage you enough to download this mixtape.

Full disclosure, I’m on it. But I’m also a fan. A BIG fan. As I hope you’ll see from my comments below:

The Shods – I Know A Place

A classic rock n’ roll ode to rock n’ roll itself. Any song in which rock n’ roll is both a noun and a verb is alright with me! Arrangement-wise, the half-time move to the minor is the key to the song’s success … that, and the crazy film-score-meets-ska-meets-snake-charmer-music guitar solo … The chorus is straight up Hooksville, and one should definitely prepare fists for pumping … Is this a certifiable “anthem?” Yes. Yes it is.

The Ex-Gentlemen – You Were Mine

Straight out of the three-chords-and-the-truth school, complete with pick scrape to open the tune, this is music schooled in the fundamentals of heart-on-the-sleeve pop, but with bigger, badder guitars. Would I get in trouble if I mentioned The Gin Blossoms as a possible sonic reference? Possibly, but somewhere in the vortex of The Replacements, The Gin Blossoms, The Ramones, and early Elvis Costello, is where I’m hearin’ the echoes of these origins … (p.s. it’s a Prince song. But—insert heresy here—I’m not really a big Prince listener, so I didn’t really notice that.)

Man, I dig this guitar sound. Very much. Lots of adrenaline here, and shouting, and gang choruses, and big chords, and thumpin’ beats, but behind it all, a wizened take on addiction and its perils: “She likes diamond rings, rubies and pearls.  It don’t feel as good as when the needle stings.” I’ve seen the band’s songs described as “heady,” and that’s about right … I think it’s a brave move, and I applaud it. Rock n’ Roll shouldn’t be stupid. This is smart rock’ n’ roll, and I’m with the Manifesto here, I approve!

Well, that’s a hell of a lyric: “I love the way that you lose. You look good with a bruise.” And here’s an image for you: “The moon is full of shit tonight.” This is straight-up garage with lyrical color, with a particularly excellent dose of guitar perfection that refines the art of sounding sloppy on purpose; music like this deserves a guitarist who is deadly serious about not sounding deadly serious, and they’ve got one here, and it’s a good thing.

Yeah man! Killin’ riffs here, can I be forgiven for hearing a trace of Fast Eddie Clarke in the intro? This is one of my favorite tracks on the compilation. The riffs are just endless and awesome, and I especially dig the call-and-response vocal thing in the verses. It makes me think of Fugazi. And any time that happens, I’m fuckin’ happy. This song is what barre chords were invented for, but that said, the “new revolution” section that kicks in around the 2:20 mark is a whole other kind of guitar groovy … “We need a new revolution, and we need it now.” Yep … Timely.

I’m gettin’ a whole lot of early Clash things here, and lots of other references as well … but the band that REALLY comes to mind as a comparison is the legendary Swingin’ Utters … I was playin’ many of the same clubs as the Utters were in San Francisco when “The Streets of San Francisco” first hit, and MAN, I loved that record … so if I love this song, I’ll confess it may partly be due to Utters nostalgia .. but that’s alright!

Holy shit. Wait, what? Greece. Jesus … this cut is killer. My fave song on the compilation. #EssentialListening.

Swedish Punk Rock? Ok, I’m game. Full disclosure, your love for this song is going to live and die on whether you dig this voice or not. On all other fronts, the right ingredients are there. Crunchy git, train wreck drums, gang choruses, and of course, the gang girls themselves, populating the lyrics as they do. As to the voice, it’s up to you. Either this is a pretty nondescript but certainly reasonable rapid-fire garage-punk cut, or it’s insane, and thus, cool. I’m goin’ with the latter …

Wow. BIG Wah Wah. That’s a rarity in this scene, and much welcomed, done this way. The guitar is in fact fully crazed across the board, but the metalhead-meets-message-punk thing way works … This is crazed rock with a vision:

No gods no masters, we truly are the free
We are above it all, no links to your society
We live without a fear of any higher being
We’ll skip on judgement day and head straight to to the fiery sea

Small lyrical nitpick, “hell” is conventionally accepted to be a religious concept. So if you were really free of gods and higher beings then you probably wouldn’t be/couldn’t be goin’ to hell, cuz it wouldn’t exist in this paradigm … so either that’s a bit sloppy with the songwriting, or I’m missing somethin’ … But again, that’s a minor lyrical red flag; on all other fronts, this rocks. I especially dig that guitar opening, which actually sounds a lot like early Judas Priest … vox are great too, a big fat baritone worth of revolution …

Man, that’s a dynamite guitar opening … so, ain’t no brakes on this song. None at all. None. No brakes. This is 3 minutes and 30 seconds of a guitar player just tearin’ the shit out of a song … I’m a workin’ class zero, baby … dig. Must listen …

This harkens back a bit further than most of the other tracks on this compilation … less 70s, and more 60s, to my ear. A bit more bluesy, a bit more old-school rock n’ roll … seriously Detroit. This track itself isn’t funky enough to be the MC5, but it’s very Stooge-y … not in a bullshit Strokes way, but in a live, raw, real way … this is a great add to the compilation, really brings a necessary flavor …

Oh yeah man, this is some murky cool shit, complicated and complexicated by the contrast of a tough female vocal on top of the surging mass below … cool recipe, definitely works, and from my hometown even! Santa Cruz in it … Dig the lyrics too:

Quarantined for no reason
In a pinch
End of season

Listen, in the end, it comes down to this. Does YOUR punk band have this vocalist? And does she end YOUR song by sayin’, “Man, I made a puddle,” and then askin’ you what time it is? No? Then best be quiet, and just listen up here instead …

Some dynamite, angular, post-punk/art-punk jaggedy git-noir on offer here, straight out of The Buzzcocks handbook … and that’s all a damn good thing! This is some pretty smart music, and highly recommended …

Yers truly, and proud to be here!

The Beaumonts! Can I say it better than they can in their own words? No, no I can’t:

There’s something about Lubbock. Something other than the oppressive blue sky, the unavoidable cloud of shit-smell that occasionally engulfs the city, the flat, featureless landscape, or the preponderance of teen pregnancy, boredom, alcoholism, and God. There’s music.

And, there’s The Beaumonts. Thankfully.

Do you remember those Superman cartoons from long ago, when there was an alternate universe, where all the good superheroes had an evil equivalent, and Superman had a black-haired evil doppelgänger? This song is like the soundtrack to that universe, if the good universe’s soundtrack was “Miss You” by The Rolling Stones. What the hell do you call this music? It’s sort of disco-punk, Gang of Four-style. In short, awesome. Great note to end a great compilation!

To quote The Shods, this is indeed a Rock n’ Roll Manifesto! Download now. Or forever hold your peace.

Thank you to Greg Lonesome, and to all the music makers gathered here. Dig.