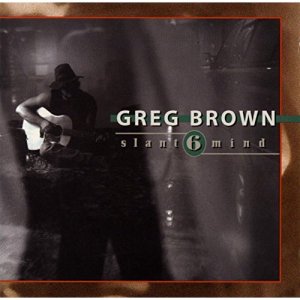 Greg Brown makes excellent records with such unerring consistency it’s almost disturbing. From 44 & 66 to Hymns To What Is Left, the man has given us so, so many great songs.

That said, he has never made a perfect album. The good songs on every release are always astonishingly good. And yet, there are always 1-2 clunkers. What’s odd, is that the clunkers are not just lesser. They’re generally awful. So bad you think they’re a joke.

For my money, Slant 6 Mind is the closest he’s come to perfection. Unlike with, say, The Poet Game, which is a brilliantly flawed album, there is no “Boomtown” here, no “Jesus and Elvis.” There IS “Hurts So Nice,” which is cringe-inducing. But it’s not a clunker on par with those other two I just mentioned.

“Mose Allison” isn’t the best thing he’s ever done either. But I forgive it out of respect for Mose Allison.

As to the rest of the songs, pound for pound, they’re as good as it gets in the world of folk-roots singer-songwriters. He’s raw as hell when he wants to be, but he’s also beautiful. That’s hard to pull off.

It’s honestly very, very difficult to recommend a single track here, but I’m going to pick “Billy from the Hills” because of it genuinely wild poetry.