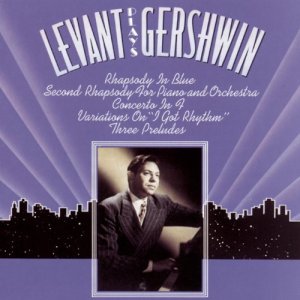 Rhapsody in Blue is certainly one of the most famous examples of “high-brow” music being influenced by the comparatively “low-brow” worlds of American blues and jazz. Dvorak’s “From The New World” stands as another example.

That said, that Gershwin is still listened to today is due in no small part to Oscar Levant’s efforts on his behalf. Oscar Levant must be given credit for being not just one of the great interpreters of Gershwin’s music, but one of its great evangelists as well.

That he happened to also be one of the wittiest people ever to live is icing on the cake. HIs books “Memoirs of an Amnesiac” and “The Unimportance of Being Oscar” give a glimpse into his acerbic takes on himself and the world, as do the following quotes—but a very small sampling of his seemingly endless witticisms:

“Every time I look at you I get a fierce desire to be lonesome.”

“It’d be nice to please everyone but I thought it would be more interesting to have a point of view.”

And perhaps apropos of our subject here (though hopefully not!):

“A conductor should reconcile himself to the realization that regardless of his approach or temperament the eventual result is the same-the orchestra will hate him.”

At the end of the day, there is the music, and there is the piano, and here you have with this album Gershwin, and one of his greatest players.

Recommended track to start with: Rhapsody in Blue, but of course. Because you simply must hear it as done by Levant.

After that, the rest. Especially the I Got Rhythm Variations, and the gold standard Preludes for Piano. But first, the Rhapsody.

p.s. my favorite Levant quote EVER:

“I’m going to memorize your name and throw my head away.”