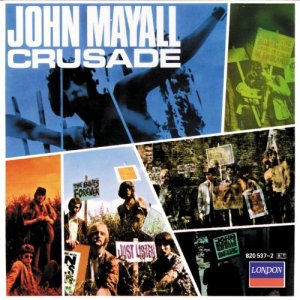 As probably anyone who’s interested in blues guitar has done, I too went through a Clapton phase. And yes, I listened (and still own on vinyl!) the Bluesbreakers album with Clapton on it. But that’s not my favorite John Mayall record. This one is.

I got to open for Mick Taylor in Denver, CO right around the time he released his “Stone’s Throw” album, a criminally overlooked piece of work. Check it out for his cover of Dylan’s “Blind Willie McTell” (written as “Willy McTell” on the album). It’s 8 1/2 minutes of truly soulful slide guitar … Being on that bill was such an honor! I felt like a schoolkid telling him about how often I’d played Crusade when I was still learning how to play …

And play it I did! Man, I wore out record needles playin’ this LP. It’s really spot on from start to finish, but the track that just knocked me out was “The Death of J.B. Lenoir.” This was like some kind of holy revelation to me. Mayall wrote it himself. I couldn’t believe it. At this point in my life, I really didn’t believe white people could write truly fine blues songs, and be genuinely authentic about it—authentic both to themselves, and to the tradition. But here it was. It was strangely … I don’t know how else to say it … it was strangely white. And yet, it was SO soulful, and so bluesy, and so vibey, and so REAL.

The first time I heard “The Death of J.B. Lenoir” was one of those key, life-changing moments when I really got a strong, clear, powerful sense of what I wanted to do with my life. I wanted to write songs like this one. I was probably 16, maybe 17 years old at the time.

And this is still what I want to do with my life.