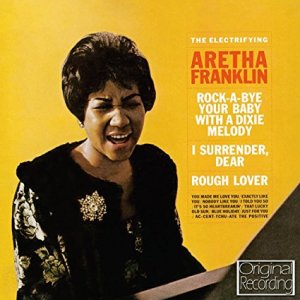 Technically, I believe this is actually the 3rd Aretha Franklin album, but I like to think of it as her debut, as the two previous were: a) a religious album recorded in a church when she was only 14, and b) a “group” album featuring her in front of the Ray Bryant combo.

So, here she is: Aretha Franklin. Astonishing. What else can you say? What’s extraordinary about these recordings is neither her youth, nor even her voice, but her POWER.

There are NONE of the funky soul sounds that we have come to associate with her and her powers. This is not the Aretha of Do Right Woman. These are honestly not powerful songs, per se. Some of them border on trite even, the hackneyed. But Aretha … my god, she’s powerful.

It just doesn’t matter what she sings. Her her-ness just grabs your head and instantly owns it. If I could have gotten my karma in place in time, I would have loved to have been born as the microphone she sings into on these recordings.

Recommended track to start with: That Lucky Old Sun

Listen to the first four words of the song. That’s all you’ll need. You’ll kneel at her altar for the rest of your life.

As a close second, this has GOT to be one of the greatest versions of Rock A Bye Your Baby With A Dixie Melody ever. Right up there with the version by Sonny Rollins.

You owe it to yourself to go back and listen to this era of Aretha. She’s just so extraordinary.