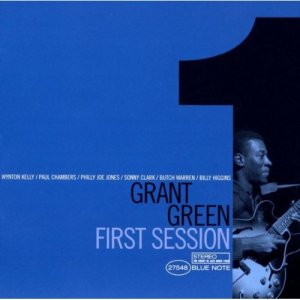 Debuts are fascinating things. Sometimes they’re fascinating because they plot a starting point on a long developmental trajectory. Think of Tom Waits’ first album, and compare it to, say, Rain Dogs. Other times, a debut delivers us a fully-formed artist, so much so you can hardly believe it’s a first release, so fully realized are the concepts and sounds. The debut from The Doors is a good example.

This album is a debut, even tho it wasn’t released until about 40 years after it was recorded. Chronologically tho, these are indeed Grant Green’s first recordings.

They largely belong in the second category, tho this assessment is complicated somewhat by the fact that GG had a sort of second career w/ a very different sound. So I guess consider this the fully-formed debut for a career’s first half!

For my money, and contrary to the direction public opinion seems to run, I like tracks 1-5 best; these are the ones recorded with Philly Joe Jones, Wynton Kelly, and the best jazz bassist ever, Paul Chambers.

Yes, the playing is at times tentative, but there’s a tenderness and vulnerability—almost an “anxiousness” to GG’s playing on 1-5 that I just find really appealing. And still today I marvel at how all the ingredients of the Grant Green sound are already here, at the point of debut.

Grant Green is one of my very favorite Jazz guitarists—right up there w/ Charlie and Wes—and this is a beautiful debut so very well worth listening to, both for historical reasons, and just to really appreciate the birth of a sound.