Willie Dixon – I Am The Blues 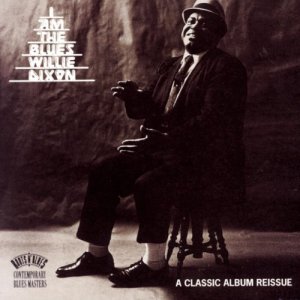 When I was comin’ up as a young blues music fan, there was a lot to learn, and not too many ways to learn it, outside of just plain ol’ listenin’. So many of the greats were already gone, only so much had been written about them, video footage was scarce, and there was no internet. There were albums, and there were libraries. Libraries were actually a great place for albums. I spent a lot of time at the library.

So it took me awhile to work my way through to understanding just exactly the role Willie Dixon played in the formation of the next wave of the blues. As a composer, as a performer, as a talent scout, he was pretty much everywhere all the time, yet at the same time, he was kind of elusive.

Until I got to this album.

Is this the best blues album ever? Not by any stretch. Is Willie Dixon one of the great blues singers? He is not. Does this album make abundantly clear the full measure of just what it was Willie Dixon both created, and personified? It does.

There is always, of course, that question of whether it can truly be said that Willie Dixon was indeed the “writer” of these songs. You can’t really say that, to be honest. At least, you can’t if you go by the conventional definition of what counts as writing a song.

What we can say, is that Willie Dixon created what can surely be considered the modern canonical versions of these compositions—in successful enough fashion that they indeed comprise core elements of the modern blues canon.

So hats off to Mr. Dixon. He certainly earned the right to sing these blues, and the versions here are really excellent—ace performers include Sunnyland Slim, Walter Horton, Johnny Shines, and Dixon himself, and the album is a treasure chest. Open it up, and savor the jewels.