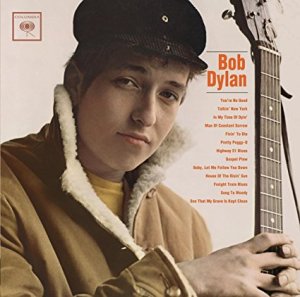 Hands up for who has an original pressing on vinyl! Yep, me too …

So, the thing is, this isn’t his best album. In some ways, it’s barely even tangentially related to the material he earned his Nobel for.

All the same, you simply can’t fully comprehend the full measure of the man’s achievement without absorbing this debut.

And that said, many of the performances here DO rank high on the list of Dylan’s major accomplishments—Song To Woody, one of only two “originals” on the release, remains one of his greater songs, even in the context of everything that’s come after.

His performance of House of the Rising Sun, despite being arguably lifted right off of Dave Van Ronk’s plate, is incomparably beautiful, and his take on Baby, Let Me Follow You Down ranks as one of the better ones historically (tho some would say he “borrowed” the arrangement here as well!).

Spoiler alert: If Dylan’s rather singular approach to the harmonica ain’t your thing, this album may drive you crazy—it’s everywhere, in all its bovine, major-chord glory.