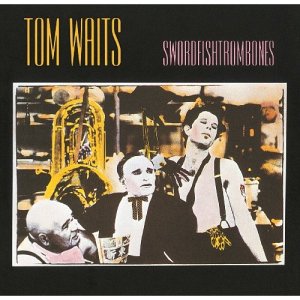 I expect to get flack for saying this, but Tom Waits has made no less and no more than three irrefutably classic albums. And they all came right in a row.

Heartattack and Vine comes close to being classic, but largely only because its aspirations are lower. Bone Machine is almost a classic too—but while it shoots higher, it misses by a wider margin.

We’ll recommend all five of these albums at some point this year, because they’re all amazing. But we’ll start with the first of The Holy Trinity: Swordfishtrombones.

I grew up the son of a Marxist English professor, who in turn grew up in the weird old America of country Kansas. We loved the lyrics of Bob Dylan. I wanted to write big, long, literate story songs that spoke a different language, one that wedded the underbellies of city and country in a noir of gutter and pew. But at the same time I knew, even from an early age, that what I loved most in music was The Raw. The rough, the dangerous, the gruff, the abrasive. I didn’t like BB King, I liked Charley Patton. So I swung my musical pendulum back-and-forth year after year, trying to sort it out in search of my own thing. Then I heard Tom Waits. That was an epiphany. He was proof positive it could be done. His lyrics were like a whole new language. It was like Faulkner and Kerouac wrapped into one. I got it. And his voice was a clear point along a timeline I feel I already knew, and understood. I’d already been trying to be Blind Willie Johnson for a decade by then. I’d already been trying to be Bukka White. They were my sound, and I knew it. But theirs weren’t my words, and I knew that too.

What Waits did with Swordfishtrombones was create a genre unto himself.

At that point, I knew nothing about his lounge lizard, piano balladeer shtick. I didn’t know about his jazzbo thing. I didn’t think he was funny, or weird. I simply thought he’d taken some of my gods, and built a new religion from them. And I was glad.