365 Days of Album Recommendations – May 1 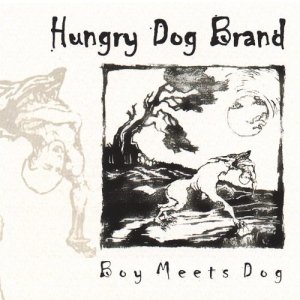 Full disclosure: I’m starting this month off with a full week of album recommendations that I have a personal connection to. So yes, biased!

I begin with English art punks The Hungry Dog Brand, and their album Boy Meets Dog. The ensemble is fundamentally the brainchild of one Martin “Hungry Dog” Dowsing, who is one of the most genuine, considerate, intelligent, literate individuals you could ever hope to meet. He’s a novelist, and promoter, and a triple-threat singer, songwriter, and guitarist.

And this, is Boy Meets Dog.

I had the great pleasure of working with Hungry Dog on this album, as producer, occasional instrumentalist, and a bit of a co-writer here and there.

We did the album in Brixton, fueled by poor coffee, vegetarian Jamaican pasties, and a healthy dose of records by Billy Bragg, Elvis Costello, The Pogues, Ian Dury, and The Clash as lights to sight by.

I really love this record. Hungry Dog’s lyrics have a brilliant authenticity to them; they’re quirky, smart, and very English. He’s funny, a great storyteller, snarky as hell, and when he wants to be, a total heartbreaker.

Listen to The Red Scarf. It’s like Talking With The Taxman-era Billy Bragg (think Levi Stubbs’ Tears) delivered by a Replacements cover band from Croydon.

Listen to A Long Way From Here. It’s a modern-day Waltzing Matilda, re-written by Phil Ochs.

Dowsing has been described as a punk poet, and that’s exactly right.