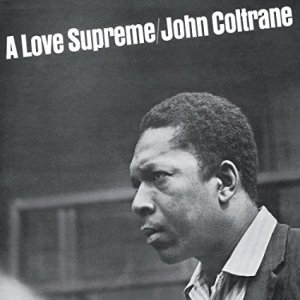 It is indescribable, what this album achieves.

So instead, I’ll tell you a story about my master’s thesis. A large part of my master’s thesis involved this album. I wrote about the parallels between Haiku, Abstract Expressionism, and Jazz. About the emancipatory potential inherent to the constrictions of form; about the necessity of—and the commitment to—being totally in the moment; about spending a lifetime of discipline and training in the service of acting, at the moment of truth, as if you know nothing at all.

I gave a presentation on my thesis, and one of the key moments of the presentation was asking the audience to listen to Part IV: Psalm while reading Coltrane’s handwritten poem; the words he phrases through his horn. It seemed like every arm in the room was covered in goose bumps. It was literally chilling.

This album represents an apotheosis of craft meeting improvisation. Worked out and conceived of in advance, the album was in so many ways already done in Coltrane’s mind before he ever entered the studio. But upon crossing that threshold, the musicians gave themselves over to the experience completely, and produced something that could have never happened before, and could never happen again. Musically, it was a pure expression of co-independent origination; nothing can happen separate from anything else. Whereas so much of Coltrane’s music was ultimately the sound of searching, here, he delivers the enactment of his search. This music IS the truth.