The Shangri-Las – The Complete Collection 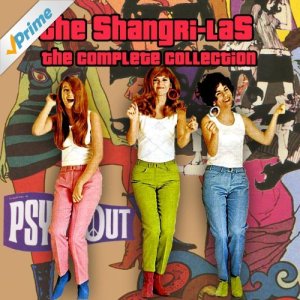 When I was a little kid, I used to pretty much live inside my parent’s LP collection. They had everything you needed to get a proper education in rock n’ roll, soul, blues, jazz, even classical.

My dad was real into the girl groups, and he had this great double LP called “Leader of the Pack.” It was a compilation of all sorts of girl group cuts, headlined by the title track, from The Shangri-Las, who also had “Remember (Walkin’ in the Sand)” on the compilation. Man, I must have worn out 100 needles just listenin’ to Leader of the Pack!

I could have simply selected their debut album, as that had both Leader of the Pack and Remember on it, but that would have meant not recommending The Train from Kansas City (originally released as the B-side to Right Now and Not Later), which may actually be the great unheralded masterpiece from The Shangri-Las. So The Complete Collection it is!

For pathos-laden girl group angst from a trio of Queens girls led by the incomparable voice of Mary Weiss, look no further than The Shangri-Las.