Gillian Welch – Hell Among The Yearlings 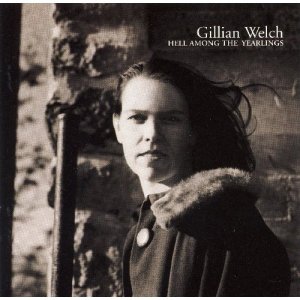 If I could blame Gillian Welch and David Rawlings for all the horrible “I’m not a folk musician, but I play one on TV” music that’s emerged in their wake, I would, because lord knows I want someone to blame.

At the end of the day though, this is just an irrefutably powerful album. If it’s a movie being delivered by actors, then it’s a really, really good movie. And if it’s real, then it’s all the more astonishing.

Some of the songs here are devastatingly intense. Caleb Mayer in particular. Others are a bit too self-conscious: My Morphine and Miner’s Refrain being two examples. But to Welch’s credit, even the flawed songs SOUND amazing, tho much of the credit probably goes to Rawlings, whose playing is literally holy.

One Morning and Rock of Ages are other standout tracks. Lyrically, they’re simple, arguably derivative, but they’re perfectly constructed, and sonically, they’re gorgeous.

As with seemingly all really great albums, there is of course also a crucial mistake. In this album’s case, it’s the song “Honey Now.” This is sort of Welch’s “Castanets,” that ghastly song that spoils the otherwise unbelievable “A Man Under The Influence” from Alejandro Escovedo. It’s a wasted track, but that’s ok. The rest of the album more than redeems this mis-step.

If this sounds like a conflicted review, it is; slightly. With regards to Gillian Welch the artist, I’m still on the fence. But with regards to Hell Among The Yearlings the album, I’m firmly on the side of love. I do love this album. I may love it like a sibling that I sometimes get mad at, but I love it all the same.