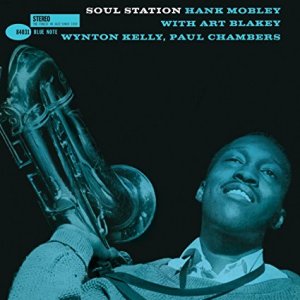 Critic Leonard Feather once described Hank Mobley as the “middleweight” champion of the tenor sax. His intention is doing so has been the subject of debate ever since, as has the impact of the characterization. If one understands this as a metaphor for distinguishing Mobley from supposed heavyweights like Sonny Rollins or John Coltrane, then it’s a misleading one at best, and apples and oranges at worst.

Jazz musicians like to talk about their “conception,” and I think this is perhaps a better way to understand Mobley vis-à-vis his fellow tenor slayers—each was striving for something different, and understood in this fashion, equating Rollins and Coltrane is just as silly as is separating Mobley and Rollins.

If Soul Station is any indication, what Mobley was striving for was eloquent independence atop one of the greatest rhythm sections in history; that, and a seamless integration of bop and the blues. It’s a dynamite achievement, and while Mobley may lack the wailing search of Coltrane or the bottomless well of Rollins’ improvisational mastery, he more than makes up for it in rigor, swing, vibe, tone, and clarity.