Neil Young – Everybody Knows This Is Nowhere 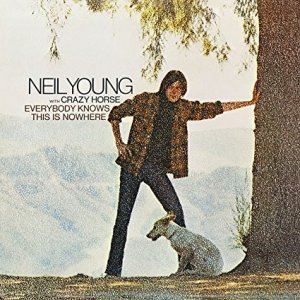 Being a Neil Young fan is … um … complicated.

His first two albums do, however, provide at least a semblance of an opportunity to draw some aesthetic and preferential lines. For example, you might classify his first album as “Acoustic Neil” and his second album as “Crazy Horse Neil.”

Were it were that easy!

It’s not. It’s complicated. Why? Well, for one thing, I often really love Acoustic Neil. But I don’t actually really love his first album. And I really love Everybody Knows This Is Nowhere, but I often don’t really enjoy Crazy Horse Neil.

Which brings me to Everybody Knows This Is Nowhere. Which I’m really fond of. I’m not ashamed to admit that Cinnamon Girl probably still remains my favorite Neil tune of all time. It’s the one song I just keep going back to. I love to play it. I love to sing it. I love to listen to it.