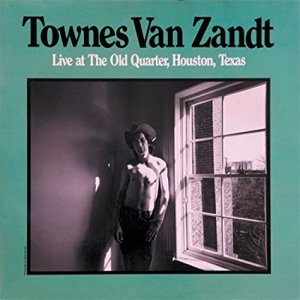 Townes Van Zandt wrote songs that were so painfully beautiful it hurts to listen to them.

His great songs—of which there are SO many—present a body of work that is so real, so powerful, so poetic, and so gorgeous, he simply has to be ranked as one of the most gifted troubadours history has ever produced.

Townes’ songs could also be funny, silly, lighthearted, obscene, ribald, rakish, and mundane. In short, his songs were the equal of the people whose stories he told.

Townes was a mythology of his own devising, but one which has antecedents going back thousands of years. He is a Texan Li Po, a hippy Dylan Thomas, a hobo Bacchus.

Here, on this album, he is simply a man, with a guitar, in a small Houston room, surrounded by friends and fans, playing a collection of songs that are delivered in so down-to-earthedly straightforward a fashion  it’s almost easy to miss their full import.

One after another, the effect of these songs on your spirit intensifies in ways you don’t even notice. So much so, that by the time you’ve listened to the last song trail away, you’ll wonder why you’re exhausted.

You’ll be exhausted because Townes will have crawled into your soul and felt every emotion for you, and then held himself up to you like a truth mirror.

By too many accounts to discount, these live, intimate, solo acoustic recordings definitively recreate what it was actually like to hear Townes Van Zandt do what he did best—which was to a) sing great songs and pick great guitar, and b) walk right into your spirit house, sit down on your chair, and commence to breaking and repairing and breaking your heart.