The Internet Made Music Free, and Other Wrong Ideas

The real story of the devaluation of creative content, and what we can do about it.

There is a story making the rounds online right now titled “A brief history of why artists are no longer making a living making music.” I came across it on the Roots Music Canada site, where it’s described as follows:

“Today’s column from veteran Canadian singer-songwriter Ian Tamblyn is adapted from a speech he gave at a symposium at Trent University.  It’s a long read, but we decided to post it here all at once in its entirety because, well, it’s just that good.”

My two cents, it’s not that good.

Still, it’s gotten a deal of traction. It’s my suspicion this is because it panders to musicians who want to believe some things about their careers that are not in fact true.

To be fair to Mr. Tamblyn, I appreciated his attempt to build an argument into an exhortation, and I’ve no doubt his heart is in the right place. He also makes some decent points along the way, but whatever thematic momentum he manages to develop derails at an all-too-common stumbling point, that being this notion:

If we’re ever to move beyond our current state of affairs, it is REALLY critical we do NOT accept this statement—the internet did NOT make music free. We did. All of us. Listeners and creators alike. The internet introduced a new way for free to be possible, yes, but we didn’t have to use it. Yet we did, and then some, and this renders us the architects of the very changes we so love to complain about. Every artist who has ever made something available for free, and every listener who has ever consumed music for free—we are the culprits.

I have this disagreement with fellow musicians all the time in the context of Spotify. Musicians are generally angry at—and about—Spotify. But if you need an enemy in that scenario, turn your sights away from Spotify, and train them on the 87 million users of Spotify. They’re who make Spotify possible. 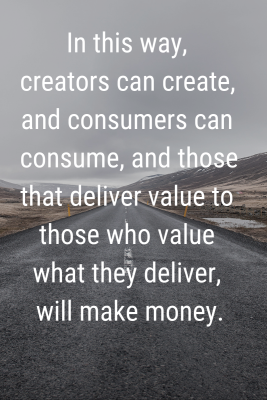 Revenue on the internet mostly follows an elementary model when it comes to creative content. Think of it like a garage sale that never ends, and never charges anything.

Let’s say I put a sign up in my neighborhood that says I’m giving everything in my house away for free. Guess what happens? LOTS of people come to my house! So then, I go to the local coffee shop, and I say, “Did you know there are 1000 people coming through my house, just today? You should really pay me $500 to put a sign for your coffee shop in my living room. Think of all the people who will see it!” Now, obviously, this won’t work in real life, because after the first day, all my stuff will be gone, and I won’t have 1000 visitors anymore. But if I’m YouTube, people will keep coming, because I always have free stuff I’m giving away. So businesses keep paying me money to advertise on my site.

That’s how monetization of creative content now works on the internet. The money doesn’t actually come from the content. The content is just the bait. The money actually comes from the traffic. Because not only are there visitors, those visitors are also generating data. So sites sell the traffic (you should advertise on my site, because I have SO many visitors!), and they sell the data (if you only knew which items in my house people most wanted to take, and which rooms they went to first, and which rooms they stayed in longest, think how much better at advertising you’d be!). This is the result of creators being willing to let their content be used as bait, and this is the result of consumers being willing to have their behavior sold in exchange for free content.

To put this more tangibly, all of us would have to remove ourselves entirely from the current marketplace and take our goods and our business elsewhere, to a marketplace where content itself has value.

The good news is, this is already happening. Sites like Bandcamp allow creators to sell their music directly to consumers, and consumers can make their purchases there without fear of their behavior being re-sold in the form of data. (See Bandcamp’s terms of use for details). And, Bandcamp does not make money through advertising, they make it through revenue sharing with their artists. Full disclosure, I am a commercial musical artist, but I don’t currently use Bandcamp. I just happen to appreciate the value of what they offer.

So, that’s it. The internet didn’t do it. We did. We started it. But we can also end it. But not in the way that Ian Tamblyn honorably—but naively—suggests:

“If we as artists attend to the work at a professional level, if we support the community in every way we can as artists, and you have invested in us, is it not incumbent on the community to support in kind?”

While this may seem noble and right, it’s nonsense. It’s not upon the community to DO anything.

In a content marketplace, value is determined by demand, not effort. You can work really hard to create your music, but if no one likes it or wants it, your effort doesn’t matter—your music still has no commercial value. And as musicians and creators, we’re not OWED anything, just because we created something.

What ACTUALLY needs to happen, is creators need to set a realistic price, and consumers need to pay it if they want it, in a marketplace with no interference from advertising and data tracking. If no one pays, the creator can remove their product, change their product, or lower their price. At some point, ideally, a sweet spot emerges, and the creator and the consumer can, in effect, strike a deal. In this way, creators can create, and consumers can consume, and those that deliver value to those who value what they deliver, will make money.

This entry was posted on Tuesday, March 19th, 2019 at 9:39 pm and tagged with Creative Content, Digital Downloads, music, Online Music, Spotify and posted in Music Industry. You can follow any responses to this entry through the RSS 2.0 feed.
« An Open Letter to The Rock n’ Roll Manifesto
Et Tu, T-Bone Burnett? »