Tag Archives: Bringing It All Back Home

Bob Dylan – Bringing It All Back Home 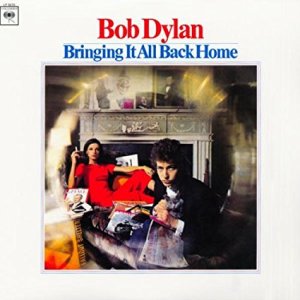 Recommending this album is a bit like announcing that water is wet.

It’s so obvious that it’s that good, and it’s of course SO influential, and we all know it, and we’ve all listened to it a million-and-half times, and generation after generation has simply devoured its offerings without ever being sated, because we just want more and more and more.

But there is a limit.

Incredibly enough, the album completes itself before the 47 minute mark. Just 46 minutes of music. That’s all. Just 11 songs.

It’s as if The Bible, The Koran, The Blue Cliff Record, all were just 11 chapters long. Just brief afternoon reads. That’s all.

As far as I’m concerned, Dylan invented songwriting with this album. Either that, or he invented something we need a new name for. Cuz whatever this is, and whatever came before it, are very different things.

Recommended track to start with? Don’t be silly.