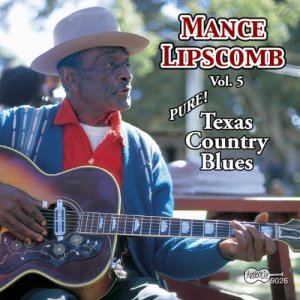 As far as I’m concerned, every single thing Mance Lipscomb ever recorded was perfect. And his “oral autobiography” I Say Me For A Parable is one of the greatest books I’ve ever read.

So I’ll get around to recommending pretty much everything of his if I can manage it.

But today, I caught myself thinking about this particular album, and so I’m recommending it!

I was thinking about it today because: a) the version of “Evil Blues” that I recorded for The National Blues is based on his performance from this album, and b) because this album features one of the simplest songs ever in the history of country blues music, that also happens to be awesome. It’s called “I Just Hang Down My Head And I Cry.” And it’s awesome.

There was a time when I bought ANYTHING on vinyl from Arhoolie that I could find. This is my greatest acquisition, and it’s why I bought all the other ones. This album is a treasure of such musical magnitude its value is simply not quantifiable.

If you listen to this album, and read I Say Me for a Parable: The Oral Autobiography of Mance Lipscomb, Texas Bluesman, you will absorb as much knowledge about the true meaning of life as you would if you read The Bible, or The Koran, or The Diamond Heart Sutra, or whatever spiritual tome it is that guides your way on the path.

There is so much wisdom and beauty in Mance’s music, but he is also sly, funny, earthy, clever, dark, light, bouncy, brilliant, simple, complicated, funky, raggy, swingy, stompy, mysterious, approachable, mesmerizing, familiar, strange, and wonderful. In short, his music is life.

This son of Navasota was delivered unto us so that we might understand the magic of song.

I know for myself personally, regarding the entirety of my guitar style, a good quarter of it can be traced directly to this man’s sound. And if you look at my 20+ years worth of a discography, and if you find there something resembling eclecticism, I ask you instead to consider me simply a mendicant musicianer at the altar of Mance’s accomplishment, one who is simply trying to understand the magic of song.


(arrangement based on the Mississippi John Hurt version)

Tonight, Virgil and I, we gon’ jus’ roll the dice, and see what songs come up. Recent “set lists” (in quotes of course, cuz they’re not exactly planned!) have included songs from just about every Preacher Boy album over the last 20 years (including some I’ve NEVER played live before), plus a whole slew of groovy ol’ country blues gems and other Preachorum Obscurata. Here’s just a sampling:

The Cross Must Move & Dead, Boy (from Preacher Boy and the Natural Blues, Blind Pig Records)

The Dogs & At The Corner Of The Top And The Bottom (from The Devil’s Buttermilk, Manifesto Records)

A Little Better When It Rains & One-Way Turnstile (from Demanding To Be Next, Coast Road Records)

Mama, Let Me Play With Your Yo-Yo (Blind Willie McTell)

I Just Hang Down My Head And I Cry (Mance Lipscomb)

A Scholarly Paper On Preacher Boy? 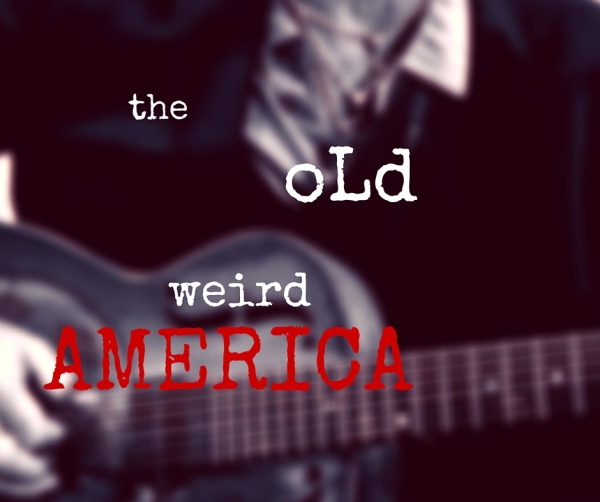 Preacher Boy: A Citations-Included Scholarly Performance Review, and Guerrilla-Raw Recordings From The Show

I have been fortunate to receive a great many press reviews over the years. Most of them have actually been quite favorable, for which I’m grateful. Some even remarkably so. Many have been funny, some almost frighteningly spot on, and virtually all have had something insightful to contribute.

That Canadian publication that likened my singing to “Motorhead’s Lemmy singing the blues?” That was awesome.

The Seattle newspaper that described my music as “dark, beautiful, desperate, and soulful?” I loved that.

And of course, getting reviewed by Rolling Stone was pretty special, though getting a nod from Living Blues may have even topped that, given that I pretty much grew up reading that magazine. Still hard to believe I ended up in those hallowed pages.

The point being, I’ve been lucky that so many generous individuals have elected to write about my music. But a scholarly article, complete with citations and the like? That’s something new for me.

Yet that’s exactly what has transpired. Jonathan Dryden, one of the finest musicians working today–a true piano virtuoso–and a deep musicological student of all things Americana, has penned what I think is a rather extraordinary article based on a recent Preacher Boy performance, and focused on a suite of turn-of-the-century songs that feature in my rather ramshackle repertoire.

I am humbled beyond imagining by this piece of prose, and honestly hesitated to even share it. Well, at least I hesitated for a second or two. Truthfully, I couldn’t wait to share it. I am proud and humbled both, and genuinely stunned to find what I do so deeply understood, so “gotten.” Mr. Dryden is as sensitive and intelligent a writer as one could hope to be on the receiving end of, and I am so grateful to have been considered in this fashion.

Here is an excerpt from this paper:

“Compared to Len Spencer’s jerky and hurried version from the 1910s [Preacher Boy’s] pace was leisurely but well-timed. In his hands, the song didn’t sound one hundred-twenty years old. It was fresh and exciting, and the lyrics weren’t dated. He played it in a modern shuffle rhythm, alternating between G major and minor from beat to beat in the opening four measures instead of the traditional G major throughout. Where there had only been a tonic and dominant chord in the song, he found ways to insert sub-dominant and relative minor chords that brought out the melody and lyrics even more than a plain rendition would have done.”

You can read the full paper by clicking Preacher-Boy-at-Aptos-BBQ-1232015.

And should you wish to listen to some of the performance yourself, here are a few live guerrilla-raw recordings from the show in question:

You’ve Been A Good Old Wagon, Daddy But You Done Broke Down

For my versions of the above, I am indebted to recordings by Mance Lipscomb, Mississippi John Hurt, Leon Redbone, and Dave Van Ronk.

And for this post, and the story it contains, I am indebted specifically to Jonathan Dryden. Thank you, sir! And I am of course indebted to all at Aptos St BBQ, upon whose stage I had the pleasure of performing these songs. I am also indebted to anyone who has been gracious enough to write about me and/or the music I play. And finally, I am indebted to the music that came before me, and the musicians who made it. Deep bows to all.

#NowPlaying: Music You Probably Aren’t Listening To, But Should Be

Joseph Spence. Yep. That’s right. Joseph Spence. Caribbean Country Blues. Trust me. And here’s the best way to get your head wrapped around the gloriously bent and magic acoustical muttering beauty of this strange and incredible artist. Listen to his version of Sloop John B. Because you know the song, but you have NEVER heard it like this. And it’s so, so phenomenal … I mean, literally cool beyond imagining. Seriously. Dig this.

Dock Boggs. I am a firm believer that proper Country Blues needs to occasionally be a bit creepy. And there is little music in the world that is more creepy than Dock Boggs’ original version of  Sugar Baby.

Freddie, by Mance Lipscomb. Mance is associated with a great many fantastic things, and rightfully so. But not often with one chord drone songs. And let’s digress for a moment to note that one chord drone songs are the ultimate measure of a musicianer. And Country Blues does it best. Yeah, take that, modal jazz! (which I happen to love, btw). Anyhow, Mance hypnotizes on this one, so dig:

And here’s one from the newden days. Chris Whitley (RIP) laying into Spoonful with the Billy Martin & Chris Wood, the esteemed Medeski, Martin & Wood rhythm section. Just when you thought an ol’ blue chestnut like this one couldn’t be reimagined successfully, here comes this motherfu&*er of a rendition. This, people, is modern country blues. Not … that other stuff. This.

I had the great pleasure of bein’ joined on stage last night at Aptos St. BBQ w/ blues harmonica legend Virgil Thrasher (you may recall him from decades of mojo-laden music w/ country blues icon Robert Lowery). We did about 2 hours straight, and amongst other things, hit on some lovely ol’ country blues songs that have been real close to my heart for a real long time … Here’s some raw, guerrilla audio of two of those tracks (recorded last night); hope you dig:

The first is a tune by Delta man Tommy Johnson, and it’s worth noting that it opens with what I think is one of the great haiku-spirit blues couplets of all time:

Who’s that yonder, comin’ down the road?
Lord, it look like Maggie, but she walkin’ slow

That’s a whole lot of pathos right there … so simple, but I get chills even typin’ it out … so much meaning writ into those few words …

The next song is a staple of a kind, and this arrangement is a bit of a modge podge worth of versions, drawin’ mainly on a cocktail of Blind Willie Johnson, Mance Lipscomb, and Dave Van Ronk …

Anyhow, hope you dig, and thanks as always fer listenin’…

As we close in on the release of new Preacher Boy material, we’re startin’ to look at specific songs, performances, arrangements, etc. This one’s in the running for one of the releases, and this is some behind-the-scenes footage of the recording. It look place in a beautiful old lodge nestled way up in the Santa Cruz Mountains … most mojo-laden, to say the least…

Anyhow, the song is an open-tuning, slidge guitar re-imagining of a piece learned from a Mance Lipscomb recording. His version was called “Evil Blues.” Here, it’s just “Evil.”

For the guitar-heads amongst ye, it’s my 1936 Natty, tuned to open Gm, and capo’d at the 4th fret. Heavy tapered brass slide, and D’addario brass-wounds with a 13 on top and a wound 3rd string … National fingerpicks …

I really hope y’all enjoy this, it’s a song I’ve loved some 25 years now, and it’s both an honor and a terror to record it and present it …

Cheers all, thanks so much for payin’ me some mind…