As with a great many early blues recordings from canonical artists, there are now many different ways to get your Kokomo Arnold. Different compilations, different record labels, new remasters, etc. I spend a fair amount of time listening through different versions of collections like these, trying to find the ones I think offer the best combination of quality and “naturalness”—what I mean by naturalness in this case is, I prefer NOT to hear the heavy hand of the remaster.  If I have to choose, I’ll take the “original” scratchiness over absurd amounts of filtering and manipulation.

This is why it was such a pleasant surprise to stumble on this collection of Kokomo Arnold recordings. I know nothing about the label other than that they’re based out of Italy, and that they’ve done a similar treatment with Cab Calloway’s music. But what I can tell you is that the sound quality here is really fine; warm, natural, clear, and you can REALLY hear what Mr. Arnold is gettin’ up to w/ that slide.

Kokomo Arnold’s influence is unmistakable, and probably fairly widely acknowledged at this point, given that two of Robert Johnson’s most well-known recordings—Sweet Home Chicago and Milkcow’s Calf Blues—are clearly swiped nearly wholesale from Mr. Arnold. Not to mention that Elvis did him some Kokomo as well!

Unlike many still-living early-era blues players sought out by enthusiasts in the 60s, Kokomo Arnold didn’t take up the offer to return to music, so all we have are his earlier recordings, but honestly, that’s more than enough to enshrine the man in hallowed halls.

His commanding voice, both urgent and powerful, had a moxie all its own, and his effortlessly clear and cutting falsetto is remarkable. His sense of melody was virtually flawless as well, which helped make so many of his compositions so timeless. But it’s his guitar playing that really raises the bar. Take a listen to The Twelves (Dirty Dozens) if you want to hear a flat-out clinic on how to play acoustic slide guitar. It’s just lethal. 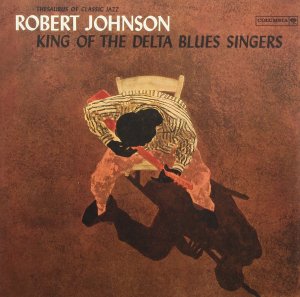 First off, don’t listen to any box sets, or reissues, or alternate takes, or versions purporting to be the correct speed, or anything else. Instead, just listen to the issued takes, as they were issued by Columbia in 1961 and 1970 respectively, in the order they were issued in. Preferably on vinyl, if possible.

I have original mono vinyl of both these albums. I got them in 1984-1985, somewhere in there. Full disclosure, yes, I have every bloody reissue ever released as well. But, the mono vinyl is where it’s at. Mono. As issued.

Robert Johnson was a synthesist operating at an almost unbearable level of proficiency and intensity. Virtually every composition and performance has an obvious antecedent, yet the songs are somehow entirely his own as well. Come On In My Kitchen draws straight off the well of Leroy Car and The Mississippi Sheiks. Sweet Home Chicago bleeds Kokomo Arnold’s blood. Hellhound on my Trail is Robert’s uncanny channeling of Skip James. And so forth.

For me, it’s Johnson’s lethal combination of meticulousness and venom that makes this music so awe-inspiring, so compelling, so hypnotizing. His precision is otherworldly, even as he’s howling, snapping, and cracking his way through the frenzied deliverance of a song.

Why this track? Because he pulls out literally every stop to push this maniacal 2 minutes and 52 seconds of country blues perfection over the top. It’s a complete tour de force. It’s his master stroke, his Guernica.

After Robert, only God.

It Was A Set Your Daddy Dug Tonight [Live Tracks Included]

The inestimably excellent Virgil Thrasher brought his groovily moody and soulfully squallfull harmonica to the stage this evening, and together we ran down a set list which—upon retrospecting—I rather dig.

Here’s the full list of the songs we spelunked in and out of over the course of two solid hours tonight (please click the hyperlinked tracks to hear live, guerrilla-live recordings straight from the stage to vibrating drums:

If I Had Possession Over My Judgement Day (arr. PB, after Robert Johnson)

Comin’ Up Aces (PB, from “Demanding To Be Next”)

I Just Hang Down My Head And I Cry (trad., arr. PB, after Mance Lipscomb)

Jackson Street (PB, from “Demanding To Be Next”)

The Dogs (PB, from “The Devil’s Buttermilk”)

Down And Out In This Town (PB, from “Gutters and Pews”)

My Car Walks On Water (PB, from “The National Blues”)

That’s No Way To Get Along (arr. PB, after Rev. Robert Wilkins) 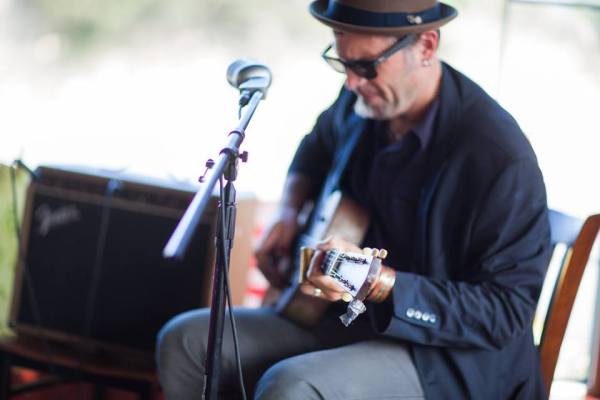 (arrangement based on the Mississippi John Hurt version)

Blues Under The Moonlight: The Setlist From Tonight

If every picture is a poem, this is a haiku:

What song to sing when
the moon’s white eye shines? Which tu-
ning, and how open?

In alphabetical order, these are the songs I chose:

What’s A Preacher Boy Setlist Look Like These Days? 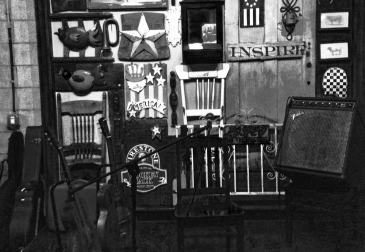 The stage at Aptos St. BBQ

To be honest, I’m not much of a setlist person, though I will say, there do tend to be patterns as regards the songs I select, and the order I play them in. More often than not, it comes down to simple questions of tuning. Because I use a number of different tunings, I generally try to do songs in such an order that I don’t spend the entire time mucking with the pegs.

So, what’s a Preacher Boy set list look like these days? Well, it’s pretty heavy on the country blues, that’s for sure! Here’s the crop from tonight’s show at Aptos St. BBQ, though to be honest, I have no idea what order I played these in, but I do know these are the songs I played (in parentheses, either the composer, or the musicianer I got the arrangement off of):

I’m just starting to read Dave Van Ronk’s autobiography, so that’s what got me in the mood to play one of his arrangements. The book is:

and so far, it’s pretty delightful. Dave Van Ronk was such a huge influence for me. All those Tom Waits comparisons over the years used to just make me laugh, ‘cuz for fuck’s sake, haven’t you ever heard of Dave Van Ronk before?

The first time I ever performed a country blues kind of tune before an actual audience was courtesy of my old high school English teacher substitute Mr. Tom Nolet. He was a blues player, and knew I was hopelessly into it all as well, and very graciously invited me to sing a song at his gig at a coffeehouse. I was 16, and I played (or attempted to play, I should say) Dave Van Ronk’s version of Po’ Lazarus, and I was bloody awful, and Tom apparently lost the gig, and well, that wasn’t a very good start to my career (and obviously not good for his either!) and I don’t think I sang on mic again for another 5 years!

But I still play Po’ Lazarus sometimes, as well as a spin-off of Dave’s version of Come Back, Baby, and of course the version of Motherless Children that I noted above.

So that was me tonight. The Mayor of Aptos St. BBQ.

If ya’d like a lil’ taste, here’s a VERY rough live track from tonight’s show. The tune is “A Little More Evil,” a never-yet-recorded-and-released PB cut (and that thumpin’ sound is me boot!):

jesus christ, look at you, you lookin’ like you dead wrecked
i wish i had a way to pay for you to get your head checked
you so fuckin’ strung out man it’s time to face the music
you ain’t got but the one life and you about to lose it